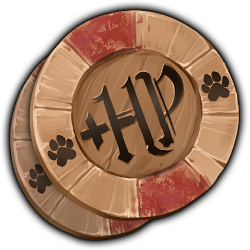 A Tokota's hierarchy status is a symbolic measure of its experience and influence, shown in its visible confidence and body posture. Some Tokotas will stay at the hierarchy status they were born into, but many - with or without help from their handler - will be able to rise through the ranks and claim the boons of a higher status.

The hierarchy system is used to level up your Tokota through drawing or writing about them. As they accumulate points your Tokotas will rise through the hierarchy, eventually reaching Alpha status.


When you believe your Tokota has enough HP to advance to the next hierarchy status, please proceed to the Hierarchy Updates journal!


While accumulating HP is not required, it is beneficial for certain aspects of the group, particularly breeding. There is no pressure to earn HP; it is 100% up to you how you want to draw/play the game with your Tokota.

The first step is to either use the HP function on your Tokota's import on the Tokotna site, or make a journal to track your points. All HP journals must include the following;

The first step is to determine which category your picture falls into, depending on its media.

Please note: Art must be entirely original to count for HP. Using premade assets like pixels, 3D models, in game screenshots or bases, or reuse/edits of your own backgrounds/line art and editing them will not count for events, tamings, CEs, activities, HP or any group feature.

Literature can count for HP in both standalone works and in the description of art pieces. If your piece is primarily art or crafts but has a story in the description, simply add the HP generated from the wordcount to the total. In this case, only the art or craft would generate the bonuses below, not the added story. Standalone literature generates the bonuses below as normal. Literature pieces that are under 600 words will be subject to the HP count being halved, in a similar vein to the "chibi" ruling for art (see below).

Physical crafted items such as sculpture, bead work, felt work, plushies, etc. Must be of sufficient detail to count, and the Tokota's markings, mane and build must be recognizable.


Once you have determined which category your piece falls under, it's time to start adding up the bonuses!

Does not apply to literature, must be semi-complex to count. Requires some substance to it (ground details, sky details, trees, rocks, etc), but does not have to be magnificent. If doing multiple poses on a background of the same Tokota, it will only count as a background for one of the poses. You must draw unique backgrounds for each one for it to count for each pose. Photo or drawn backgrounds with hand-made elements. Photos/handmade items must be your own; no stock. Pure photo backgrounds, even ones you have taken yourself do not count towards backgrounds. Manipulation does not include cropping, color changes or enhancements or other such small changes.

The Tokota will only get the bonus if they are participating in the activity - if you threw in an extra Tokota just for HP, they would not get the bonus.

This only applies for Tokotas participating in the show. (For example, in Rite of Knowledge, the Tokotas being caught do not get this bonus.) Most common shows that qualify for this bonus are Continuous Event and PvP entries.

Example of a longer video: Once Upon a December | OC Animatic

Inclusion of the following bonuses requires that the following rules must be met for the Tokota/character that confers the bonus:

Apply to all categories except where stated. Some bonuses differ by category. You must link to imports and Tokopedia entries for some of these bonuses to count for HP.
Bonuses listed 'Do not stack' will only give you the bonus of 1 of the included Tokotas for that bonus. Ex. If you add 2 starters, you only get the bonus of 1 starter (only +2 HP and not +4HP)

Chibi images will only count for half of their normal HP value. Please note that Tokotas has its own unique definition of 'Chibi!'

'Cute' art (intentionally exaggerated anatomy with obvious effort put into it) can be counted by the same rules as normal art, as that is considered stylization, and completely permissible. However, if we find something that we strongly think looks lazy or that looks like it took five seconds, it may be considered 'chibi' for HP purposes.

To determine this, we will do a quick check of your gallery and compare it to the rest of your artwork. If we determine that it's simply your style or level of art skill, we will not hold it against you, and it will count by the same rules as normal art. We will deal with this on a case-by-case basis, but don't be intimidated. It's not because we hate cute things, but simply because we don't want the group crammed full of thousands of half-hearted points-gathering chibis by capable artists that took five or less minutes.

A handy rule of thumb for determining if a bonus will apply to your HP sheet or not, is to imagine how you would count the HP if you divided the sheet into individual deviations. Handlers, starters, backgrounds etc., can only count as many times as they are drawn uniquely.

Lamb Totem grants +15 HP To each Tokota if it is visible. Link your profile page with the visible totem.

If your Tokota has the Social Trait, +2HP for every image/literature they are depicted in (when collaborated by the owner). +3HP at Dominant.

If your Tokota has the Loyal Trait, +1 extra HP when depicted with a handler or starter.

If your Tokota has the Leadership Trait, it should be listed somewhere visible, preferably the top of your HP tracker.

If your Tokota has the Quick Learner Trait, additional HP found in activity rolls can only be applied to itself (at Submissive and Average).

If you Tokota has the Shapeshifter Trait, it should be listed somewhere visible, preferably the top of your HP tracker. You may depict them in one (1) alternate form. Markings must still be recognizable. The Shapeshifter form may not be used for any activity, event, etc in the group, and may only be used for HP purposes.


Submissive Tokotas are very common, being the young and inexperienced or followers at heart. They don't easily command respect or leadership positions, but with hard work and perseverance they can reach just as high a status as any Tokota.
Submissive Tokotas display a lowered tail on the import backgrounds labeled 'Submissive'. (Please note you must have a Borga Stone to use Borga Stone backgrounds, and a Sikrinerk Stone to use Sikrinerk Stone backgrounds.)

Average Tokotas are also common, and along with Submissives make up the majority of a wild pack. They display a balance of initiative and obedience that allows them to potentially lead a very successful life even without ever rising in status. In a pack without a Dominant or Alpha Tokota, one or two Average Tokotas may take the lead based on personality, strength, and experience.

It takes significant effort and time for a Tokota to rise to Dominance, and as such it is a fairly rare event. These Tokotas are the leaders and gurus of their packs and are respected for their wisdom, skill and experience.

Tokotas that have what it takes to rise to the status of Alpha are extremely rare. They command respect even outside their own pack for their capability and integrity, and whether their strength is spiritual or physical they are considered the greatest leaders in the lands.

Alpha Tokotas hold the same proud posture as Dominant Tokotas, only with the spirit of Aippaq in the aurora above them, or on the import backgrounds labelled 'Alpha'.

Have questions? Double check the page before asking, and if you still do not find your answer, you can comment on the Tokotas main page, note the Tokotas group, or ask in our Discord!

We also encourage you to share your feedback. If you think it's too difficult, intimidating, or complicated, feel free to share.