Physical Traits
Bob Tail
Curled Tail
Fangs
Roman Nose
Non-Physical Traits
Aippaqs Fortune II: Heterozygous genes have a +10% chance of passing on to offspring. Rare mane types (Including one carrying parent) have an increased chance of passing on to offspring.
Big Boned II: Pups from breedings in which Dires are possible, have a 10% higher chance of being Dire built.
Exemplary Dire Blood: If female can be bred up to 12 times in lifetime. If male can be bred up to 15 times in lifetime.
Maujas Draw II: Pups have a greatly increased chance of inheriting a random mutation. (Chimerism, Albinism, Bloodmark, or any Hereditary mutations present in the breeding.)
Special Traits (Non-Hereditary)
Aippaqs Inheritance: All Direct Descendents of this toko have reduced HP required to move up hierarchy statuses. (Submissive > Average - 50 HP / Average > Dominant - 200 HP / Dom > Alpha - 250 HP)
Courage: Provides a +5 bonus to Racing and Teamwork Competitions.
Mimic: If this tokota is used in a breeding with a Hereditary Mutation, they would count as a parent with the same mutation for pass chance. This does not boost above two parents. 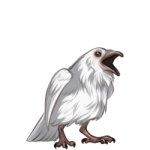 Raven (Albino)
Removes the chance to find trash items while Exploring. Common items will be found in the place of trash. Does not affect addendum rolls.