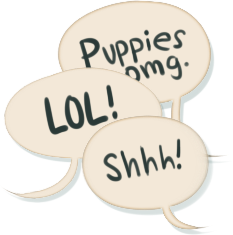 Common Tokotas Abbreviations
General | Descriptions | Breeding | Systems | Hierarchy & Fertility | Factions | Items | Traits | Retired Terms
The following is a wall of commonly used abbreviations and acronyms in Tokotas and what they stand for. Please note that this isn't a complete list. If there are any abbreviations or acronyms you would like to see added, please put them in the Suggestions Box!

Please click any highlighted words for links to their sections or for more detailed descriptions!